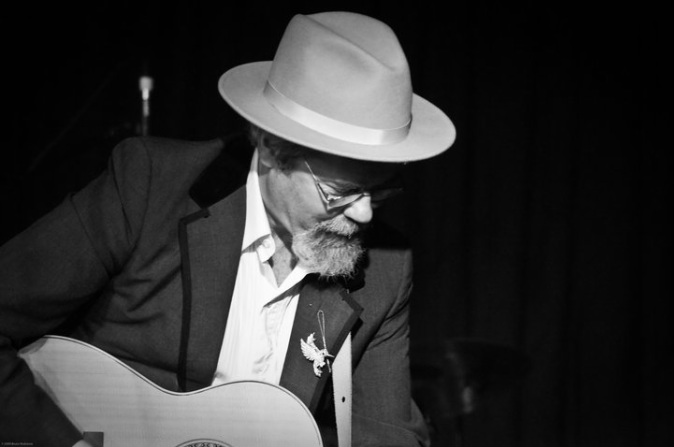 I draw music from the many deep wells of North American roots music. I am inspired by the strong songwriters and musicians, men and women, who have gone before and the men and women who are writing and performing today. I listen for notes of Spirit and I am drawn to the inherent dignity and power of truthful musical art. The bandstand is a place of truth. I feel the privilege and standing up with players drawn to the mystery of music making. This is one of the deepest joys of my life. I hope to bop till I drop. As John Lee Hooker said: "He’s got the boogie in him and it’s got to come out…" He was and he wasn’t talking about me.

Born in the Maritimes, Max began his career in England and after a return to the Maritimes, now makes the Toronto area his home. Max has been featured on all the major roots radio stations in Toronto, including CBC Toronto & Ottawa . You can find Max at his monthly gig at the Free Times Cafe or at the Moonshine Cafe in Oakville .  He has also performed at The Winterfolk Festival, the Tranzac, The Music Gallery, as part of the Wavelength series and at the Cameron House.
Max is a recipient of a FACTOR New Talent award. His 6th album of original songs, Nazca Hummingbird, is now available at gigs and mail order.

" First off, Max Woolaver has a wonderful voice. Although this nine track release seems a somewhat confusing array of country rock versus songwriter fare, the quality of the music is strong throughout. Very strong indeed…this collective of strong musicians swirl around Woolaver like a swarm of bees…Woolaver is a vocalist to watch with something worth saying…Highly recommended for its potential alone." Eric Thom, Penguin Eggs, Autumn 2009 (Reviewing The Innocence)

"In the years that I have been following them, I have always been impressed by the musicianship of the Max Woolaver Band, and inspired by Max’s songs." David Cayley, Producer & Writer, Ideas, CBC

"The audience favourite and the standout performance of the series was Max Woolaver. It was heartening to see such a warm and enthusiastic reception for an artist who was from out of town and completely unknown to the audience prior to the set. The entire room was buzzing with praise for Max’s strong stage performance and moving songs, as well as the exceptional musicianship of the band…" Amatish Update (Concert review)

"Max Woolaver is one of Canada’s best kept secrets. A great original songwriter and band leader who is not afraid to go to places where passion and deep feeling meet great music." Judy Perly, Free Times Café, Toronto